Prior to setting off to Alaska John & Jenny flew into Vancouver. They used www.canadianaffair.com  to book their hotels and flights. They stayed at The  Hilton hotel at Gatwick ( a short walk from the train station and the departure terminal) cost of £78.30. The flights were non-stop with Air Transat at a cost of £756.50 per person. They rather decadently  spent 4 nights at www.bluehorizonhotel.com at a total cost of £644.73

DAY 1 – 29th July 2017 Vancouver
It’s around 5pm on Saturday afternoon and Star Princess slips quietly away from her mooring at Vancouver’s East Berth. Crystal Serenity is berthed alongside, with Holland America’s Nieuw Amsterdam next to her. The Serenity’s crew and passengers wish us ‘bon voyage’ as the ‘Star’ turns sharply to head under Lion’s Gate Bridge and makes her way towards the open water of English Bay.
The snow-capped peaks can be viewed from both sides of the ship as she passes a variety of commercial vessels lying at anchor seaward from the bridge.
A BC ferry plies its trade as it crosses our path to the front of us thus providing a vital lifeline between these various British Columbian communities.
Soon its time to pass Point Atkinson and make a turn to starboard into the Strait of Georgia as Star Princess heads north to Alaska. Was that a hint of a whale we spot to our side?
At around 10pm, another Holland America cruise ship, the Noordam, makes a close acquaintance as she passes less than 50 metres away. For her passengers, that Alaskan experience is almost complete whereas for us the adventure has only just begun.
Shortly after the Noordam’s passing, we are greeted by the lights of a substantial shoreline community as the last hint of daylight fades away. This will be the last signs of human interference with the natural world for some considerable time. Star Princess prepares to spend our Sunday cruising the waters of British Columbia. 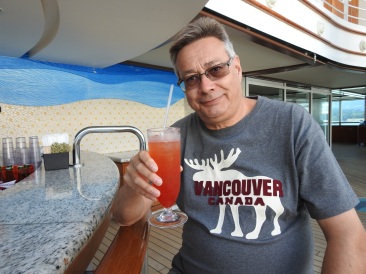 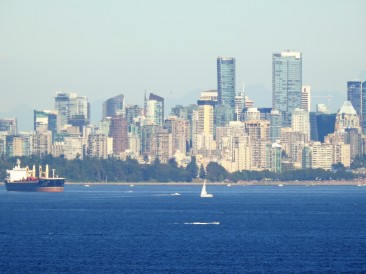 DAY 2 – 30th July 2017 At sea
Star Princess made her way overnight through the Strait of Georgia and the Seymour narrows. Our path was a northerly one as, during the morning, the ship made its way into the open waters of Queen Charlotte Sound.
We would remain in Canadian waters for the remainder of the day and not a single other vessel was sighted.
DAY 3 – 31st July 2017 Ketchikan
During the night, the ship crossed the border into US waters of South East Alaska via the Tongass narrows. Star Princess spent the day at Berth 4 here – arriving 0535 local time and departing at 1425.
Our time in port was spent making an early visit to the shopping area of the city. Some signs of life between 0700 and 0800 along Creek Street, the town’s former red light district. We were joined in port by several other cruise ships including Crystal Serenity. 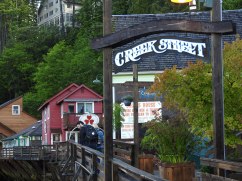 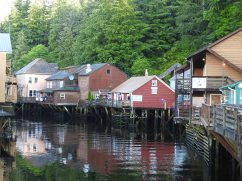 DAY 4 – Ist August 2017 Juneau
Star Princess entered the Gastineau Channel overnight and entered Juneau harbour. By 0750, Star Princess was secured at Franklin Street dock where she was to remain until 2110.
Juneau, the Alaskan state capital, is currently pipping Fairbanks as the state’s second largest city (behind Anchorage) with 30,000 people plus located downtown and around 110,000 in the wider community. Our day was to take us out on the waters in the quest for wildlife sightings. We were to be rewarded by sightings of humpbacks, sea lions and harbour seals. The highlight was probably an orca (killer whale) cruising close to an island shoreline on our boat’s return to base.
The bus was then to take us to the visitor centre at Mendenhall glacier. Our first sight was that of a steady stream of returning salmon making their way up water to spawn. The visitor path was closed preventing the best chance of a bear sighting here. This may have been in connection with the BBC’s live coverage from their cameras based here for the last few days.
On returning to downtown Juneau we took the Mount Roberts Tramway to the top of the mountain giving panoramic views of the ship – and its swimming pools – below. The ‘raptor centre’ at the summit turned out to only have one resident – a rescued bald eagle called Lady Baltimore. On our return to sea level we were bemused to find a pedicab and just had to have a ride. Albeit a short one, our pedaller charged us a flat US$5. What a cheery chappy. 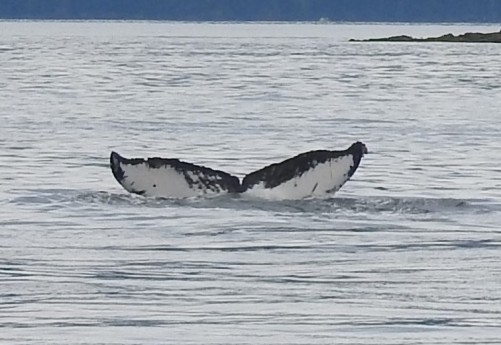 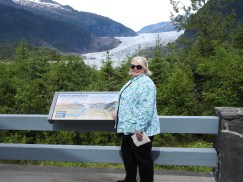 DAY 5 – 2nd August 2017 Skagway
The Lynn Canal forms the narrow entrance to the port here and by 0500 the ship had negotiated this channel and secured herself at the Railroad berth.
This berth is convenient for another chance for us to take the White Pass and Yukon Rail Road the 20 miles or so each way to White Pass summit close to the Canadian border. We were slightly late departing due to a scheduling hiccup here as one of the locos on the preceding working had to be exchanged just down the track at the rail depot.
On our return we took the fixed fare, $2 each way per person, shuttle bus both ways to and from downtown. But unlike our previous visit there was to be no sign of our lady with her horse and cart.
Around 2040 Star Princess set sail for Glacier Bay. The small town of Haines was passed around an hour later and Eldred Rock just around midnight. 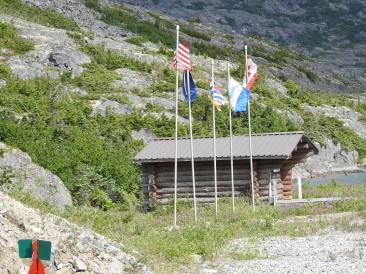 DAY 6 – 3rd August 2017 – Glacier Bay
Today is one of the highlights of the cruise. We are to spend the day within the Glacier Bay National Park. Not only are the Glaciers spectacular but the route into the Glacier Bay  is a high spot for much wildlife. On entering the bay, we pick up the Park Rangers at Bartlett Cove and the ship’s entertainment for the stay is focused on what can be seen outside the ship rather than what is going on within it.
That focus is on the glaciers. Johns Hopkins comes first. Although it is not possible to get ‘up close and personal’ to this one as the Rangers have declared it out of bounds to give sanctuary to the breeding seal population. Then the ship reaches its furthest point into the Bay as both Margerie and Grand Pacific Glaciers come into spectacular view.
We have this world all to ourselves save for one or 2 smaller visitor vessels and one other cruise liner from NCL. It is literally a world where no man has dared to tread.
Several spectacular hours later we disembark our Rangers and head back to the Gulf of Alaska. 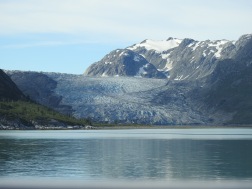 Aside from the Glaciers in the bay our favourite sighting was 7 sea otters on an ice float and their frolics in the icy water. 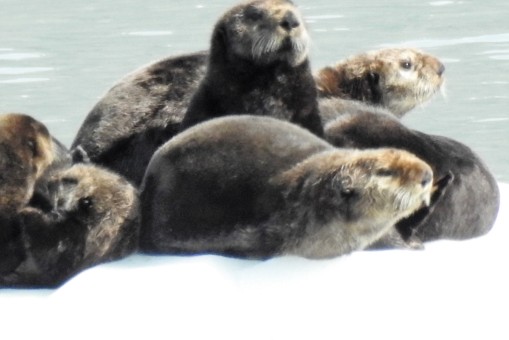 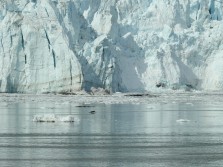 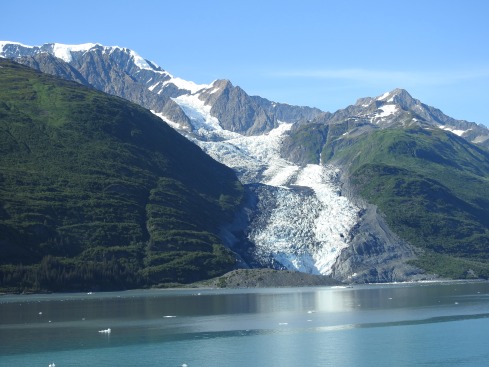 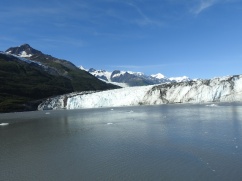 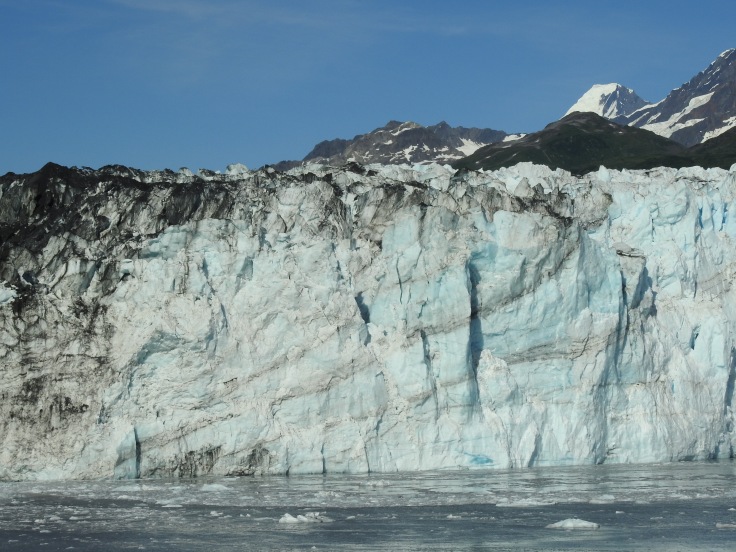 DAY 8 – 5th August 2017 – Whittier to Denali
Star Princess arrives in Whittier and its passengers go their various ways. At this point you could get a transfer  to the airport at Anchorage and fly back to Vancouver. Many did…….but not 2J’s we went on to ‘The Interior and Beyond’…….