Some passengers leave for home at this point others continue after the land trip to take the cruise, few like us continue with the back to back and the adventure continues………….

DAY 22 – 19th August 2017 – Kenai to Whittier.
Brad had a lie in – and so did we. Bags out at 0830, humans ready for 11am. And we were, for the hour long transfer back to Star Princess in Whittier.
Brad’s aim was to make the 1230 ‘slot’ in the tunnel schedule. We made it with precise timing. Hardly waited at all to pass through the 2 and ½ mile long Anton Robertson Memorial Tunnel on entry into Whittier.
Today’s bonus – sunshine. It is claimed this was only the 9th day of sun here in Whittier since May.
We were to be amongst the first to arrive. Straightforward passage through boarding and up on deck 14 by 1315 with lunch shortly after. This time we’ve dropped a deck to Caribe – cabin C404. 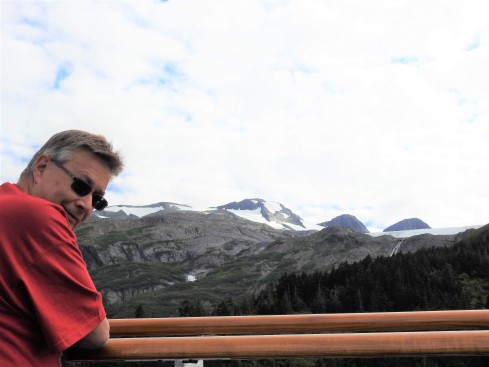 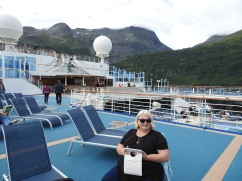 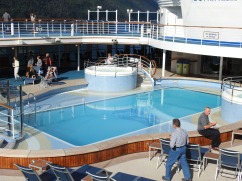 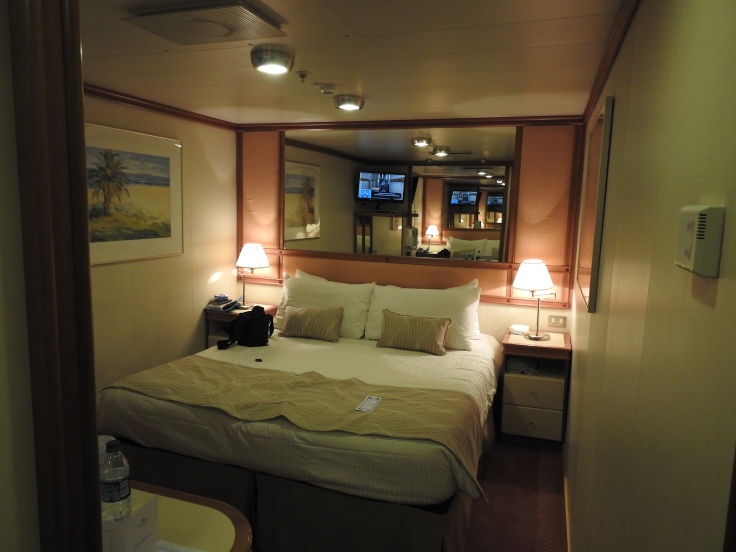 John and the camera were in for a wait. His patience was rewarded with the arrival of ARR’s train from Denali around 1745.
Early meal in Capri Restaurant as it’s the muster at 2000.
2130 was showtime with Miguel Washington (Comedian) and the dancers with their ‘One night only’ routine. And so to bed. 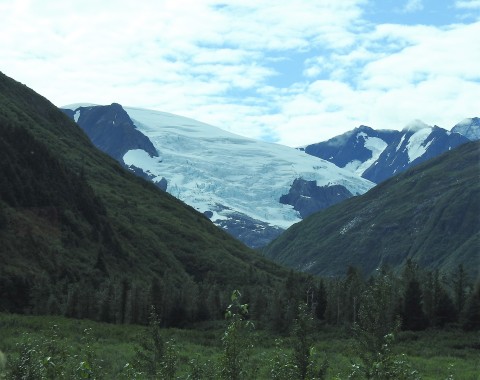 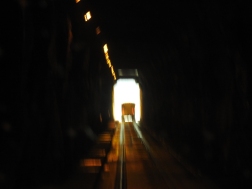 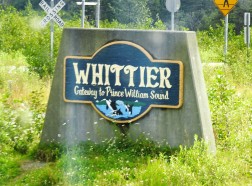 DAY 23 – 20th August 2017. At sea.
A leisurely start with breakfast around 10am. The weather has closed in and the cloud is very low.
Captain Michele Tuvo reckons it will be better this afternoon when we make the calmer waters of Yukatat Bay. In his 12 noon broadcast he advises us we have travelled 275 nautical miles since leaving Whittier with another 30 odd to go to reach Hubbard. The wind speed – a headwind that we’re sailing into – is 30 knots and, when combined with our own ship speed, gives a net figure of 45 knots or thereabouts. And we’re expected to be at Hubbard Glacier at around 1500. 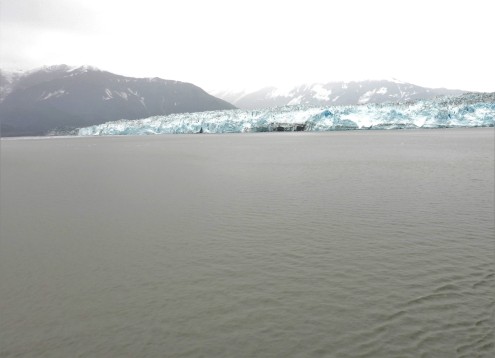 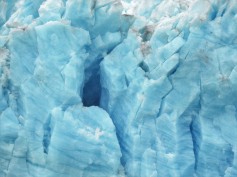 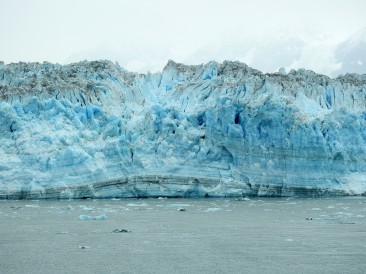 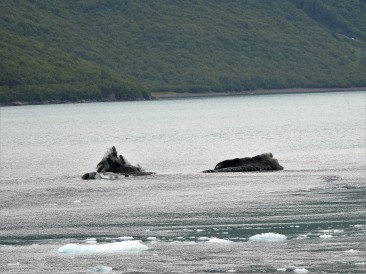 This is the largest tidewater glacier in North America. Its height is 350 feet above sea level with 250 feet below. It is 6 to 7 miles wide and stretches back 76 miles to Mount Logan in Yukon, Canada. This is North America’s second highest peak at 19,800 feet.
And it does not disappoint. As we watch from close quarters we can both see and hear the calving. The captain gives us a full hour turning the Star for all to enjoy the view.
By dinner time on a formal night we are back into open water and regain the swell. 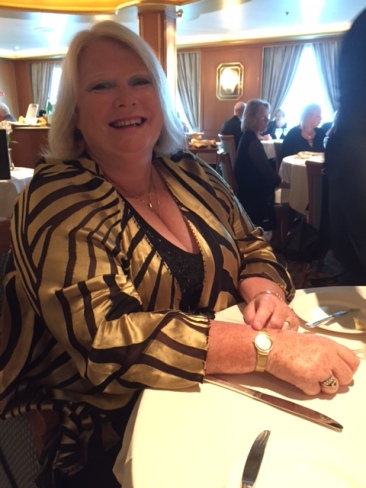 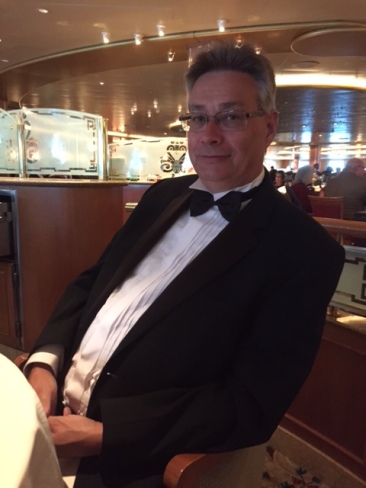 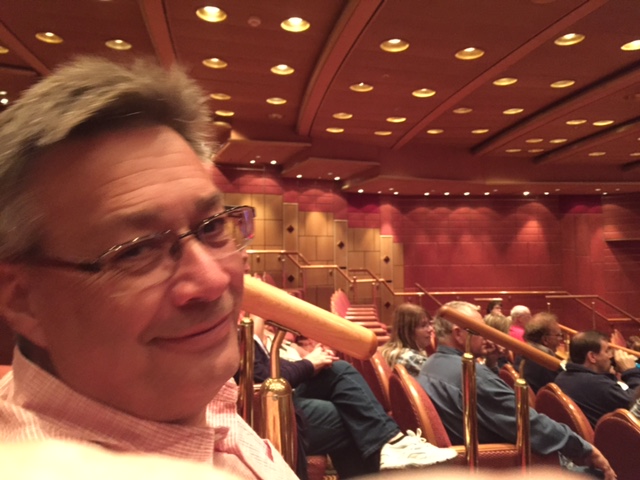 DAY 24 – 21st August 2017 – At sea.
We’d been promised a partial eclipse today (if the weather behaves) before we enter Glacier Bay. Well, of course, it didn’t – just a fleeting glimpse of the sun around 0930. By then, we had picked up the glasses for viewing, lol.
Still, our main purpose of being back in Glacier Bay was to look out for wildlife and have another chance to view the glaciers.
Our sea otter count was in double figures, probably nearer 30 in total for the day. This was complemented by an orca (or perhaps 2).
The inclement weather did not prevent the spectacular view of Margerie Glacier. Once the ship had turned and headed back south the weather closed in further rendering any more viewing impossible. Shame really, as we’d found a warm spot at Muster tender 19! 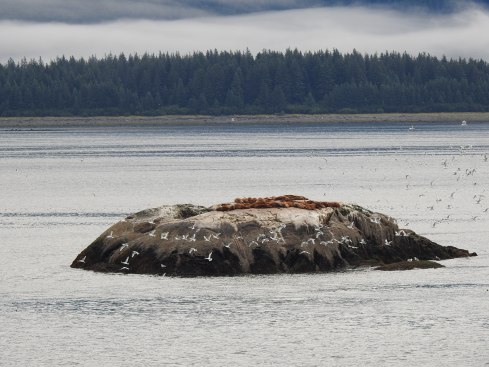 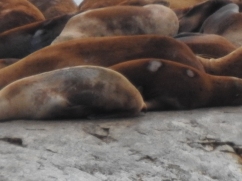 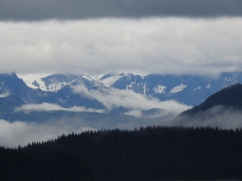 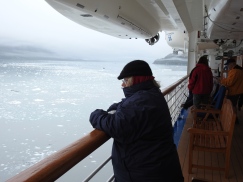 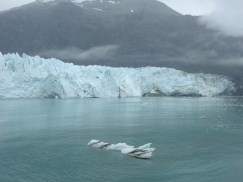 DAY 25 – 22nd August 2017 – Skagway
The Star Princess arrived early in Skagway (0530) although we were not there to see her arrive. With a long trip ahead of us we opted for a later start. We were greeted by low cloud and showers – typical Skagway really. Ruby Princess was in port on a Seattle to Victoria (Vancouver Island) which goes no further north than Glacier Bay. Celebrity Solstice and Neiuw Amsterdam were also here.
Our trip was off at 1130 – or rather we were to take the 1200 ferry, Fairweather Express I, to Haines. This is the HSFF (Haines to Skagway Fast Ferry) for passengers only.
The 14 mile crossing took 45 minutes. This is in sharp contrast to the road journey between these 2 places, a staggering 350 mile trip into Canada and back out again taking at least 7 hours!
Seabourn Sojourn was moored at the small cruise dock on our arrival.
A lunch bag (literally) was handed to us in the meeting room of the Alaskan Native Brotherhood (and Sisterhood) before embarking on our wildlife adventure.
And it was well worth it. A number of bald eagle sightings including a couple of fledglings in their nest. The harbour seals were seen at close quarters enjoying the high tide in the Chilcoot river, not to mention the abundance of salmon. But the highlights without a doubt were 2 juvenile brown bears. They were playing in the river and criss-crossing the road in front of us, One was running with the salmon he had just caught.
Chilcoot Lake was the next stop – to see the salmon returning to spawn. This was played out against a backdrop of just one of the 100,000 glaciers in the country, most of which are not named.
By the time of our return to the ferry terminal, the rain was far more persistent and the cloud so low that our return journey was a non-event as far as viewing anything was concerned.
And so back to ship at 1745. Our sailing was after the Ruby had left. We set sail for Juneau around 2015. 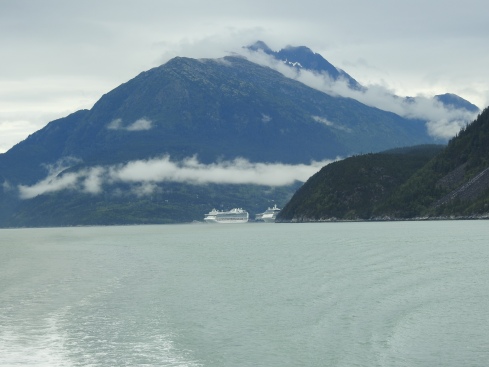 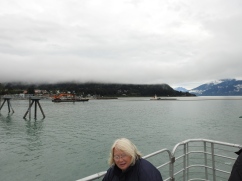 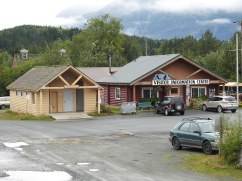 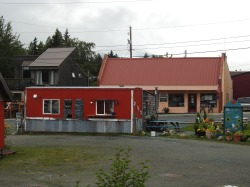 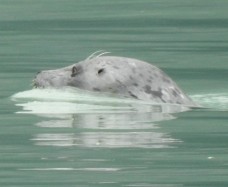 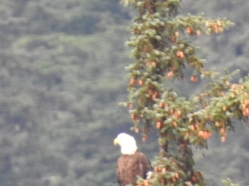 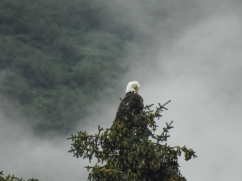 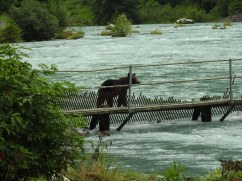 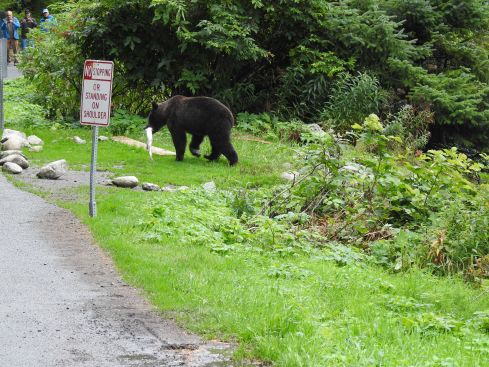 DAY 26 – 23rd August 2017 – Juneau
The Juneau day starts around 0800 and The Star has already been in South Franklin Dock for a couple of hours. Seabourn Sojourn has arrived here from Haines and we are soon to be joined by the Zaandam.
The weather looks decidedly ‘iffy’ as we take a stroll towards downtown whilst waiting to board our tour coach. It’s a 25 minute transfer through downtown and via Egan Drive as we head alongside the Gastineau Channel to Auke Bay.
Here, we board the Allen Marine vessel for the 3 hour whale watching and wildlife quest. There’s a hint of sunshine as we head north along Favorite Channel. This gives us views of Mendenhall Glacier, followed by Herbert and Eagle. In between, we meet the stars of the show as we are entertained by 6 or 7 humpback whales feeding (and perhaps one sleeping). An hour or so is spent being totally enthralled by these majestic creatures. And, by now, we’re being entertained in glorious sunshine!
Soon, it’s onwards to Little Island, the home of the community of stellar sealions. Most are resting on the rocks but some are playing in the water.
Add in, the sighting of oystercatchers nearby and that’s another half hour’s wildlife viewing that makes this place so magical.
Our return coach makes its way back to the ship but not before being trapped in ‘the only construction work on the roads of Juneau’. Its 1545 when we make it back to The Star – only to find that sister ship, Emerald Princess, has docked whilst we’ve been away. That meant the ship’s departure from here was around 1615.
And our wildlife total for the day was not yet complete. We had been promised possible whale sightings after our early dinner.
We were not to be disappointed. A tally of 7 humpbacks (although only one whale’s back close to the ship) and at least 4 Dall’s porpoises. A fitting end to our day’s wildlife quest.

DAY 27 – 24th August 2017 – Ketchikan.
We were blissfully unaware of a bear sighting on the shoreline early this morning. Instead, the ship berthing in dock 2 here at 0900 was greeted by rather typical Ketchikan weather. Low cloud and a hint of rain in the air was the order of the day when we went for breakfast at 0940.
Ashore, there were many more salmon in the waters below Creek Street. They were waiting for the current to be less severe before attempting their final push upstream.
A carved sea otter and a bear trinket for the Chrsitmas tree were the resultant purchases from our morning in town.
A leisurely afternoon followed with the Ruby Princess leaving around 1315. The Commodore was on board and he was given a big hand as he passed – accompanied by a rather tuneful exchange of funnel music. 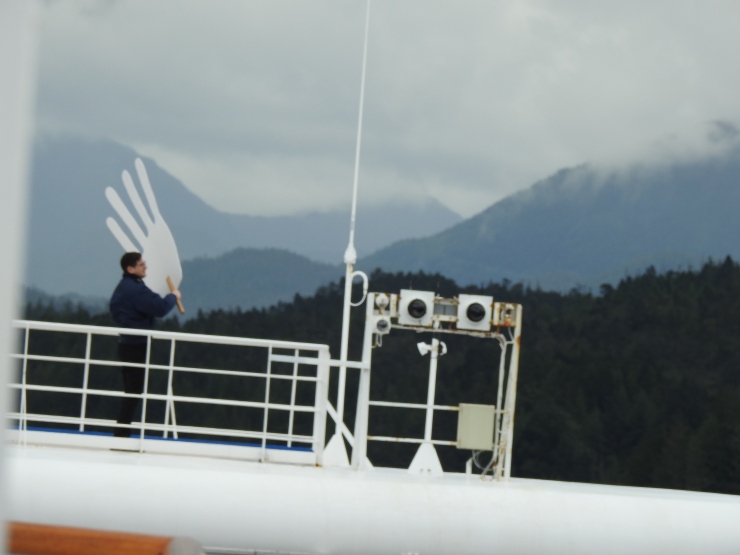 The internet café threw down a challenge to two intrepid Platinum Club members. We were only trying to use our complimentary 150 minutes!
A timely reminder on our bed as we retired – clocks forward one hour at 2am.
DAY 28 – 25th August 2017 – At sea.
At around 2am the ship moved out of Alaskan waters and back into Canada. We were, of course, tucked up and oblivious to our Alaskan exit!
At around 0930, we ventured to Lido Deck to a grey, wet morning with low cloud obscuring any view. By noon it had brightened a little and Canadian land came into view.
We were now 295 nautical miles from Ketchikan with another 250 to go to Vancouver. We are due shortly after 0700 tomorrow.
Captain ‘Bye Bye’ tells us we should pick up our Canadian pilot around 1330. And we did – and the weather was improving too.
So much so that we spent the final wildlife ‘hotspot’ viewing from up front on Deck 7 and what breeze there was proved bearable. Our efforts were rewarded with whale sightings around 1600. Several humpbacks were on view but the pride of place must go to the 5 orcs that graced us with a swimming display that would not have been seen had we been at our usual starboard midship viewing point. A fitting end to our wildlife spotting. Well, almost – we espied an otter close to shore several minutes later…
DAY 29 – 26th August 2017 – Vancouver.
We are due under Lion’s Gate Bridge around 0600 and to be docked alongside in Vancouver shortly after 0700.
In fact, we’re met with an absolutely beautiful morning in Vancouver. Warm sun under a cloudless blue sky. And it’s already around 70 degrees.
Time to disembark from our ‘North to Alaska and back again’ adventure and transfer to Vancouver International Airport for our Air Transat flight TS676 to London Gatwick.